This New Year’s Eve, we’re once again running our late night buses through until 3.15am.

Then, from 23:15 and hourly through until 03:15 in the morning, our network of NightBus services will run from the City Centre.

Our Night Buses are:

We also run N26 to Netherfield, Burton Joyce, Lowdham and Southwell which departs Nottingham at 00:15 and 02:15.

Visit our website for a NightBus map and full route details.

We will be temporarily adopting our Saturday timetable on weekdays
from Monday 10th January 2022. Some additional journeys for schools and for Colwick Industrial Estate, QMC and Ruddington Business Park will also run. Details here.

The NightBus network will be suspended.

Final arrangements for Boots Site and University services will be confirmed next week (w/c 3rd January 2022).

We need to adopt this revised timetable to provide a reliable service to customers, in line with the number of drivers we have available each day.

Like most other transport operators, NCT is affected by the national shortage of bus drivers, with a shortfall of around 5% on the number of drivers we need to run our current timetable. In recent weeks, a further 5% of drivers have been unable to attend work whilst they self-isolate because of COVID, resulting in short notice cancellations.

David Astill, NCT Managing Director said: “Prior to Christmas, despite our best efforts, our service reliability was not at the standard our customers expect or at a standard we are happy to continue delivering. We recognise that short notice cancellations cause inconvenience to customers when an advertised bus doesn’t turn up. By adopting this revised timetable, customers will be able to plan around the level of service we feel we can confidently and consistently deliver.”

The temporary timetable has been agreed in consultation with Nottingham City Council and will remain in place until driver availability increases.

Timetables for all services can now be viewed in the NCTX Buses App and online here. In printed leaflets, please follow the Saturday timetables. 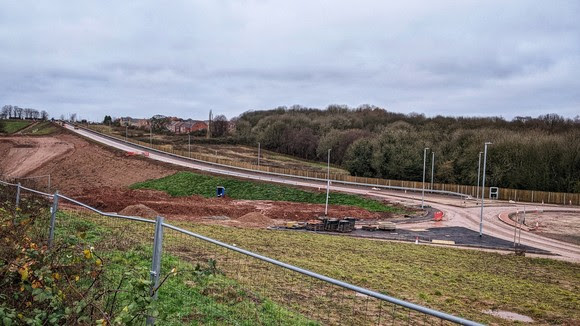 What a difference a year makes!

It’s here – the last flyover of 2021, and we’re sure that we don’t need to point out the progress! In 12 months, the site has gone from the site of major earthworks to what now resembles a road.

Down at the Burton Road end of the site, the final section of bulk earthworks has been completed and other works have included footway surfacing and the installation of acoustic fencing.

But don’t just take our word for it and watch the flyover to see the progress for yourself! (click the links below)

CELTIC STARS AT
GATE TO SOUTHWELL 2022

Spirits will definitely be lifted by the announcement of some great acts for the Gate To Southwell Festival next year. Following the commercial and critical success of last September’s event in Kirklington, the organisers have confirmed the 15th festival will take place from July 14th to 17th 2022.

The July event will also welcome Dervish, BBC Lifetime Achievement Award 2019 winners and one of the best-loved Irish traditional bands over the last 30 years.  Fronted by Cathy Jordan, among Ireland’s most famous singers, Dervish have played everywhere from Glastonbury to Rio De Janeiro (in front of 250,000 people) and become international cultural ambassadors along the way.

Kicking off the festival on July 14th, Thursday will definitely be Blues Night, headlined by “national treasure” singer, songwriter and star guitarist Ian Siegel. He’s a nine-times British Blues Awards winner, a three-times European Blues Awards winner, and he’s twice won Mojo’s blues album of the year – the magazine branded Siegal “the cleverest writer and most magnetic performer of Blues in the UK”. Alongside Siegel, Southwell welcomes the Daniel Smith Blues Band led by one of the UK’s best boogie woogie and blues pianists.

Bringing an extremely vocal international flavour to GTSF 2022, The Spooky Men’s Chorale are cult figures from New South Wales and Western Australia thanks to albums such as ‘Tooled Up’, ‘Urban Sea Shanties’ and ‘Welcome To The Second Half’.  A charismatic, funny and powerful male voice choir they’re famous for a capella renditions of pop classics such as ‘Dancing Queen’, ‘In My Room’ and ‘Ghost Riders In The Sky’.

Discount tickets for the festival – set in beautiful rural countryside near Southwell, just off the A617 (linking the A1 and M1) between Newark and Mansfield – are available now.    More acts will be announced soon.  For the latest news visit www.gtsf.uk.